Downtown no Gaki No Tsukai ya Arahende Wiki
Register
Don't have an account?
Sign In
Advertisement
in: Cast 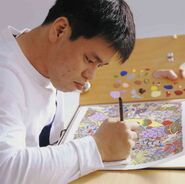 Jimmy Ōnishi (ジミー 大西) (real name: Hideaki Ōnishi, born January 1, 1964) is a Japanese comedian. He left the regular cast in 1996 to pursue a painting career. He has subsequently made several appearances in parody instructional videos that are used in the "No-Laughing" batsu games since 2005. In the videos, he either says or does things that are inane/off-the-wall, usually repeatedly, in an attempt to make the cast laugh. His most famous appearance among English-speaking viewers is in the English Lesson episode of the "No-Laughing High School" game where he shows his difficulties with using basic English, such as the days of the week or counting to 100. He is also shown to have a very sensitive sense of smell, which is used for jokes where Jimmy is used to smell something with foul stenches. After struggling financially he returned in the entertainment industry in 2015. He has stated that he would like to retire at age 65, as he would be able to live with his retirement money afterwards.

Community content is available under CC-BY-SA unless otherwise noted.
Advertisement